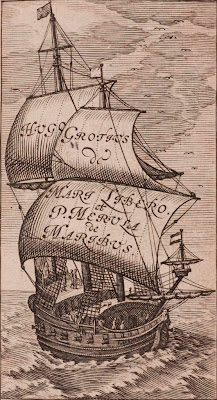 FREEDOM OF THE SEAS, 1609:
GROTIUS AND THE EMERGENCE
OF INTERNATIONAL LAW

In 1609, a little pamphlet touched off a big debate that shaped modern international law. The Lillian Goldman Law Library marks the 400th anniversary of this event with its exhibition, "Freedom of the Seas, 1609: Grotius and the Emergence of International Law." It will be on display through January 2010 in the Yale Law School.
At the dawn of the 17th century, the Dutch East India Company commissioned a young prodigy named Hugo Grotius to prepare a legal argument rejecting Spanish and Portuguese claims of dominion over the oceans around their overseas empires. His essay, "Mare Liberum" ("On the Freedom of the Seas") touched off a "Battle of the Books." What eventually emerged was a regime of international law to govern humanity's common interest in shared resources.
At the center of this battle was Grotius and England's leading legal scholar, John Selden. The exhibition documents their contributions and those from other European jurists, with books from the Rare Book Collection of the Lillian Goldman Law Library, Yale's Beinecke Rare Book & Manuscript Library, the Harvard Law School Library, and the private collection of Edward Gordon.
The exhibition was curated by Edward Gordon, Yale Law School Class of 1963, and Mike Widener, Rare Book Librarian. Gordon, past President of the American Branch of the International Law Association, was formerly professor of international law at Albany Law School, and has also taught at Rutgers, George Washington University, American University, Wellesley College, and the Fletcher School at Tufts University.
The Rare Books Exhibition Gallery is located in the lower level of the Lillian Goldman Law Library (Level L2), directly in front of the Paskus-Danziger Rare Book Reading Room. For those unable to visit the exhibit in person, it will appear in installments on the Yale Law Library Rare Books Blog, at
H. Grotius (1583-1654), The Law of Warre and Peace, [London] : printed by T. Warren, for William Lee, and are to be sold at his shop, at the signe of the Turks-head in Fleet-street, M. DC. LIV. [1654]
Publicado por José Calvo González en 0:13